Daniel Bowman is a horse trainer based in Warrnambool, Victoria. Since establishing his own boutique stables, Daniel has proven to be an up and coming trainer achieving his Group 1 success with Begood Toya Mother in the Sir Rupert Clarke Stakes  2019/2020 season.
Daniel’s vision and passion lies with each horse having its own individual training program in a happy and safe environment. With his hands on approach and the vast array of training options he is afforded at Warrnambool, he can ensure each horse reaches their maximum potential, visit our Facilities & Services to see what we can offer you and your horse.

Plans to lead and dictate the race with Magnetic Prince were aborted after the barriers opened in the last at Casterton on Sunday.
Thankfully a great ride and terrific determination by the horse secured a second career win, when railing for victory in the Tasco Petroleum BM64 Handicap over 1400m.
A natural on speed galloper, Daniel hatched a plan with Laura Lafferty to lead around the tight circuit. But after missing the start, he explained that Laura had to revert to Plan B.
“Yes the plan was to lead and win, but that went out the window early, thankfully Laura didn’t panic and settled into a nice rhythm out the back.”
It was a brilliant ride and despite being put under pressure from the 600m to improve, Daniel was impressed with how the horse responded.
“Local knowledge helped Laura, she knew going wide wouldn’t help, cutting the corner and keeping momentum was needed. To the horse’s credit he still had to pick up and did so very impressively.”
The 4YO son of Magnus is still learning, but Daniel believes with time he can eventually make it to mid-week level.
“We will look for a similar race, maybe even check the calendar for a race in Adelaide. I think he can make it to mid-week Melbourne level, but that might not be until next preparation. He still does a few things wrong as we seen on Sunday.”

BUBBLES BOUND FOR THE BOOL 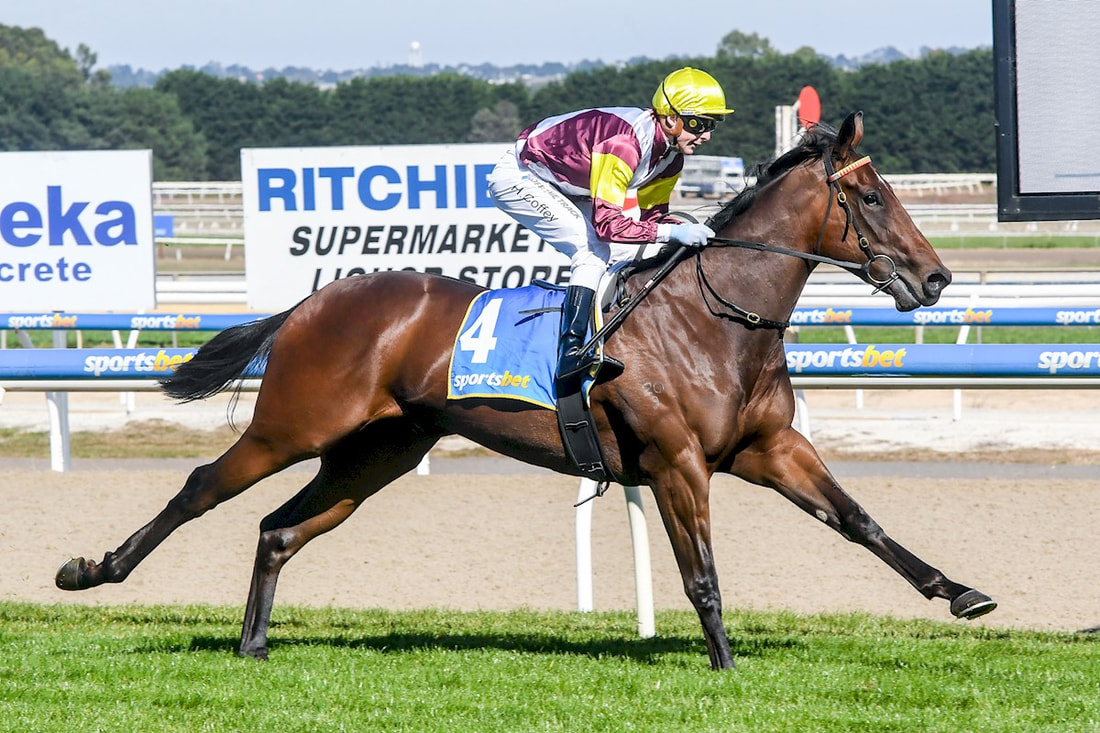 A runaway debut victory by Bubble Palace has now opened the door for a crack at the $125k Vobis Gold Strike on the opening day of the iconic Warrnambool May Carnival.
The Inglis Classic graduate of 2021 was far too quick for her rivals when leading all the way in The Haymarket 2YO Maiden Plate over 1100m at Ballarat last Sunday.
A clean getaway from the barriers enabled Harry Coffey to lead and dictate for a stylish three and a half-length victory.
The 2YO daughter of Rich Enuff has always showed Daniel plenty of natural ability to be confident, but he was also mindful when good backing came for the runner-up, Miss Passion.
“I thought she would figure in the finish, but when the money came for Moody’s filly you have to take notice from such a strong stable.”
Major stakeholders Francis & Chris Cook purchased the filly and race her in their Mystery Downs Racing & Breeding colours along with other stable clients.
Daniel was thrilled when the filly was sent his way by the Cook family who purchased her for $180k.
“I loved the filly when the catalogue came out, but the price was a little out of my range, so to get the opportunity to train for the (Cook) family was fantastic.”
The best week of any year for all Warrnambool trainers is the first week in May, and for Daniel and the owners of Bubble Palace, the thrill of a runner and potential winner looms large.
website by: Rebel Web Solutions